Those with a knowledge of the post-war Art Colony in St Ives will be aware that the Caddick and Berlin families were, for many years, good friends, The Caddicks lived outside the town in Nancledra, as did the Berlins. Their children played together, the parents socialised on a regular basis. Peggy Caddick was like an aunt to the Berlin youngsters. True, in the end it all went sour, culminating in Sven Berlin's publication of "Dark Monarch" in 1962 (several years after he had left St Ives) The allegedly defamatory content caused Arthur Caddick and others to bring a libel action which, although it never came to Court, they effectively won. After nearly half a century, there is little point in passing judgement on this regrettable falling-out. The publication of Diana (nee Caddick) Calvert's biography of her late father, offers an opportunity, as it were, to posthumously bring together these two most colourful and talented members of that fabled artistic community.

"I'll Raise the Wind Tomorrow" is not only a biography of Arthur Caddick, with extensive excerpts of his poetry and a hitherto unpublished drawing by him as cover illustration. Caddick's "Tales for Children" included in the book were illustrated at the time by the well-known artist Alan Lowndes and these drawings, likewise previously unpublished, are reproduced. The book is also a wonderful evocation of a childhood amidst the beauty - and poverty - of West Cornwall in those times.

As now famous figures such as Bernard Leach the potter, Guido Morris the craft printer, Bryan Wynter or Peter Lanyon (poet and painter respectively) and many others casually dropped in to the tiny cottage, the family lived a life so frugal it is scarcely credible. 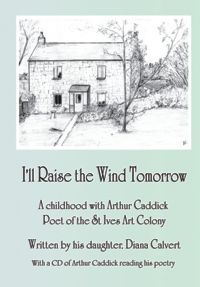 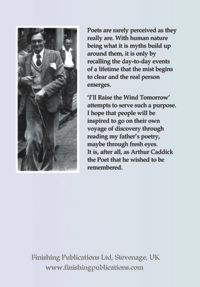 A visit to the cinema in St Ives, or to Woolworths, were great occasions. Against this simple background, Diana Calvert paints a loving, but at times quite devastatingly frank picture of her father, with his unworldly projects, his all-too-human frailties and his love of conviviality, and their close-knit family.

The book is bundled with a CD, "Illusive Hour" in which Arthur Caddick reads some 20 of his own poems. It also includes an Appendix, listing Caddick's main (and many minor) publications with details of biographical information available on-line. While Arthur Caddick made no claim to artistic talent, he was at least, a competent draughtsman, as his cover illustration shows. The book includes numerous contemporaneous photos.